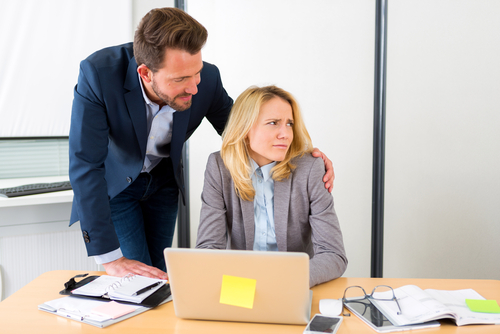 Jeannie Holohan, an administrative assistant at Newmark Knight Frank claims she has been fired after addressing to the company’s human resources department that vice chairman Merrill Roth had continuously made lude, sexual remarks in the workplace. This is the second lawsuit that has been filed for sexual harassment against Newmark Knight Frank this year.

Both the brokerage firm and Roth’s name has been marked in the lawsuit along with her claim that he has made ongoing suggestive and sexual comments whilst invading her personal space in the office. The complaint has been filed in Manhattan Federal Court after she was fired in December 2017 on the heels of reporting Hoth’s behavior to human resources. The other complaint that was filed last year was from the firm’s office in Los Angeles. Former managing director, Michael Arnold was accused of sexual misconduct. Representatives of the company say the allegations against Hoth are “baseless.”

“The company takes seriously its obligation to provide each of its employees with a respectful and dignified workplace free of harassment and discrimination,” Sarah Berman, a spokesperson for Newmark, said. “In this case, we have thoroughly investigated allegations made by a former employee and have determined them to be baseless. The company intends to vigorously defend itself and is confident that this lawsuit will be dismissed.”

Holohan claims on one occasion in Roth’s office, he brushed his hand against her thigh which she rejected and moved away from him. He then allegedly responded: “You know I’m not a sexual monster. But my wife thinks I am.” He then moved nearer to her and she made an excuse to leave his office, according to the complaint. While she was walking out, Roth allegedly said, “You know I understand women well.” Other alleged comments made by Roth include, “You think you’re so smart, don’t you? I wonder what else you are good at?”

And after looking her up and down on another occasion whilst saying, “I have no problem with what I see at all.”

After rejecting Hoth’s advances toward her, Roth began to address and correct her work unfairly and wrote a written complaint about her stating, “attitude, insubordinate behavior” on Holohan’s behalf.

The director of operations then stated to Holohan in defense of Roth, “Merrill is not a vindictive man. When he writes something, he puts a lot of time and energy into it. He is such a good man. If you can’t work with him, what do I need you for? You are not doing your job and displeasing him.”

If you have been a victim of any type of sexual harassment at your place of work please call the attorneys at Alonso Krangle LLP at 800-403-6191 or through our website at www.fightforvictims.com. Any unwanted and offensive behavior toward you can result in financial compensation. Please do not hesitate. Call us today to review your legal rights.