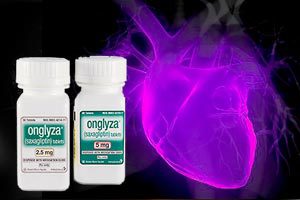 A U.S. Food and Drug Administration (FDA) advisory committee has recommended that Onglyza, which treats Type 2 diabetes in adults, carry a warning on its safety label that use of the drug increases the risk of heart failure. The recommendation was based on a large study that found patients who took Onglyza had a greater risk of heart failure hospitalizations than those who did not take the medication. While the FDA’s Endocrinologic and Metabolic Drugs Advisory Committee was concerned about heart failure, the panel did not find an increased risk of cardiovascular death, stroke or heart attack with the use of Onglyza. While the FDA has not yet acted on the panel’s recommendation, the federal regulatory agency warned in August 2015 that DDP-4 inhibitors, such as Onglyza, may cause severe joint pain in patients who are prescribed the drugs to treat diabetes. Manufactured by London-based AstraZeneca, Onglyza is a popular drug that garnered $820 million in sales in 2014, according to Bloomberg Business.

The FDA And SAVOR Study

Onglyza (saxagliptin) was approved by the FDA in 2009 to help control high blood sugar in adults with Type 2 diabetes. Onglyza is in a class of drugs called dipeptidyl peptidase-4 (DPP-4) inhibitors that are used, along with diet and exercise, to lower blood sugar. In 2008, the FDA recommended that manufacturers developing new drugs to treat Type 2 diabetes provide evidence that their medication will not increase the risk of heart attack and other cardiovascular events. The guidance rule applied to all diabetes drugs which were being developed at the time, including Onglyza.

In following the FDA’s order, SAVOR, a large, cardiovascular clinical trial was conducted on the safety and efficacy of Onglyza. For two years, researchers followed 16,492 patients who had Type 2 diabetes and cardiovascular disease or at high risk of cardiovascular disease. SAVOR discovered that patients who took saxagliptin had a 27 percent increase in the rate of hospitalization for heart failure compared to those who were given a placebo. The SAVOR study was published in the New England Journal of Medicine in October 2013.

The FDA began investigating a possible link between saxagliptin and heart failure in February 2014, when it asked AstraZeneca for data from the SAVOR study. The federal agency convened an advisory panel meeting in April 2015 to discuss the SAVOR data. While the committee found heart failure linked to using saxagliptin, the panel said more information is needed regarding an increased risk of death from all causes linked with saxagliptin. Prior to its investigation of Onglyza, the FDA launched a probe into the link between pancreatic cancer and incretin mimetics, a new class of antidiabetic agents such as Onglyza. The FDA said it would continue to evaluate data regarding the drugs.

Onglyza Side Effects That Are Listed

Onglyza, is associated with health conditions that include:

• Acute Pancreatitis (inflammation of the pancreas)

About Alonso Krangle LLP And Filing An Onglyza Diabetes Lawsuit